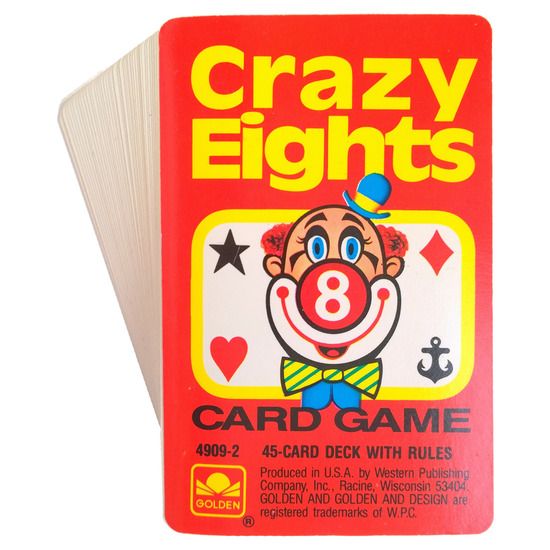 Here is yet another set of rules for an exciting card game rules for kids of 5 years and above.  Children will also know here how to play the crazy 8 card game along with all the necessary crazy 8 rules and instructions for playing, winning and scoring. The crazy eights card game can be played by two or more than two players using a regular deck of cards or special deck of cards designed to play crazy eight. Besides rendering fun, this brain teasing game helps in sharpening comparative and strategy skills as well. The objective of the game of eights is to be first one to get rid of all the cards and be a winner.

In case if the game is being played by more than five players, two regular decks of cards can also be used instead of one. We have posted other card game rules including how to play spades, Phase 10 rules, Cribbage and Euchre Rules. Refer our site to your buddies for different game rules like Crazy 8 rules.

How To Play Crazy Eight?

Find below how to play the crazy 8 card game. You can change a bit of dealing with cards according to the number of players. However, below are standard crazy 8 game rules that should be kept in mind every time you play. Not many people know that you can also play crazy 8 at online casinos for real money at  www.realmoneyaction.com has a list of best online casinos for you to play crazy 8 online!

Cards are shuffled and 5 cards are dealt to each player. If there are only two, 7 cards are shuffled. Remaining cards can be placed in a stack with a face down position. To start the play, the top card of the stack is placed face up beside the stack to start creating the discard pile. Crazy 8s start with the player who is at the left of the player who dealt and goes on clockwise with every hand.

The first player determines if he is having a card that goes with the rank or suit or color of the top card of the discard pile. Player can play a card matching the played card from the stack. It can match in any way i.e. by color; by rank or by suit. For instance if the top card taken from stack is red 8 of clubs, the player can play either a red colored card, a 8 numbered card or any club card. In case if he does not have any playable cards, one card can be drawn from the deck. The next player gets his turn to play now.

Crazy 8 Rules for All 8s

However, there is an exception with any card with a value of 8. Cards of any 8s can be played on any card belonging to any color, any suit and any number or value. 8s act as suits in the initial play. Once the player plays the card of 8, he decides on the new suit.

Player who gets rid of all his cards wins this game. The penalty points are scored by players depending upon the cards they have left in their hands. Find below the points that cards carry as per crazy 8 rules:

1. Each card of eight carries 20 points

3. All other cards carry points worth their value. (Ace carries 1 point)

Well, there are many variations of Crazy eights played among friends, but crazy 8 rules will vary slightly without significant change. You can even make your own crazy 8 rules to make the game more interesting. It all depends on you and whom you play with. Some variations include a rule of allowing a player to change suit when he plays a card of 8. If you know any interesting crazy 8s rules for other variations of this card game, do share it with us. We also suggest you refer to other interesting card game rules of spades, crib and euchre posted here.

In case, if you are having trouble understanding crazy 8 card game rules, then do let us know in the comment box below.