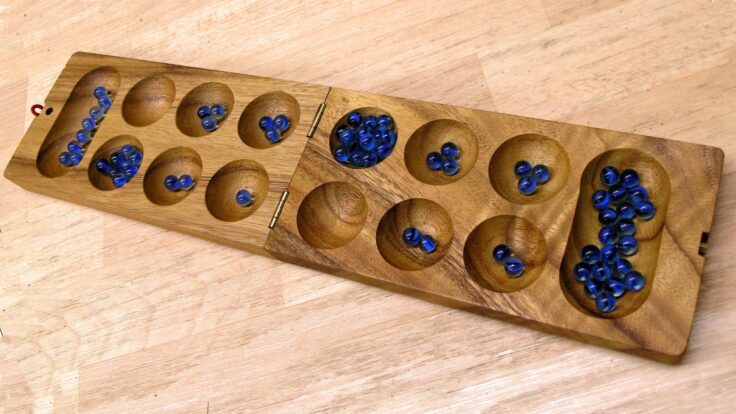 How to play Mancala game for kids

Basic Mancala Rules are shared here for kids and teenagers. Mancala is from a family of board games played worldwide in different versions. It is famous in different parts of the world as Mancala, Kalah, Oware and Congkak.

We have shared here rules of Mancala for the version played most commonly. Macala is an average difficult board game which doesn’t take too long to play. This is a two player  turn based strategy game.

Most of the variants of this board game follow general play. It involves players beginning to play by placing a specific number of seeds in the holes of the board.

Players play games by counting their seeds and removing all seeds from the hole and sowing them in following holes in some sequence. If you are a lover of brain teasing board games, you can check our posts for Farkle rules, Scrabble Rules, Jenga rules too.

How To Play Mancala

The game is played by two players with a Mancala board and 48 game seeds.

Each player owns six holes and one mancala of his side on the board. I think the Mancala rules are followed to play this game. See how to play following Mancala rules.

Here are some Mancala rules and instructions to follow while you play this board game:

Our blog contains rules for a host of other card games, board games and stacking games. Some of the most popular ones are Monopoly rules, Chess rules, Checkers rules, and Cribbage and Phase 10 rules. If you know any additional rules followed by you and your friends to play these games, you can share them with us using the comment box. Keep visiting us to know the rules of interesting games played with boards and cards.