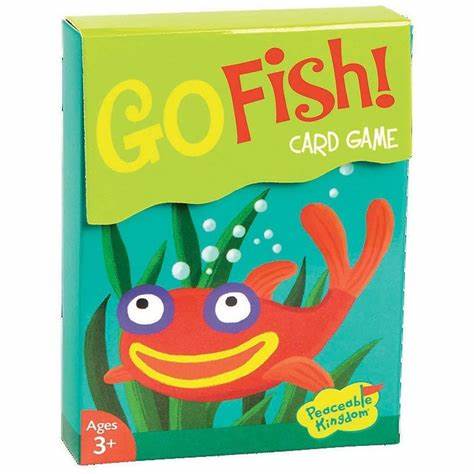 Have you ever played any card game? Isn’t it too exciting? The basic aim of any card game is to entertain its participants. The participants include any person above the age of four to adult. Card games like go fish rules, bluff, canasta, teen Patti, euchre are some crowd favorites.  The number of players for these games range between 2 to 10. In the Go Fish game each player gets four cards and above depending on the number of players.

Mastery involves luck and focus, depending on the count.  Authors and go fish bear similarity in terms of rules.

The standard 52-card pack is opened up to start the game.

The number of players required-The numbers of players vary between 2 to 7 as per go fish rules.

Age factor for playing this game-Ages 4 and above..

The main component for winning this game-This is a game, which is dependent upon the luck of the player apart from knowing the tricks to win so remember game of go fish rules.

The objective is to win the maximum number of books. When a person attains a book, it means a four of a kind group of cards in terms of number and types and independent of the suits. The dealer is the one with the highest number on his card. When the cards have been shuffled, the person to the right of the dealer cuts the deck. The dealer further proceeds to deal in the clockwise direction as per go fish rules game. Seven cards are dealt with the two players, and five cards are dealt when the number of participants is between 4 and 5. The remainder of the cards are placed face down to form the reserve stock.

Fishing for a Catch

Direction on which the game is played-The play works in the clockwise direction.

The player looks at the player to his right or left and demands a card or any number of cards of a particular number or type. For example, he might say, “Give me all your queens.” The person who is asking for the card must specify the number and type of the card so remember go fish rules. The ranks vary from ace down to two. Once a player gets his catch, he is likely to ask for another card from any other player.

Fishing is the process of asking for the card. The player is expected to turn over the required cards. The objective of the player is to try to form a book. If, by any chance, the person does not possess the card, he says,“go fish,” which entitles the fisher to draw a card from the stock. Provided he gets his type of card, he can ask another participant for a card as per go fish rules. He can ask for a different card this time.

If a participant goes fishing without making a catch, he forfeits his turn and the turn passes to the left. For authentication for the catch, he must display his card to the players. As soon as a book is completed, the player faces the four cards face up on the table and continues to play. The participant with the highest number of books wins. The go fish  game is completed when all thirteen books are finished.