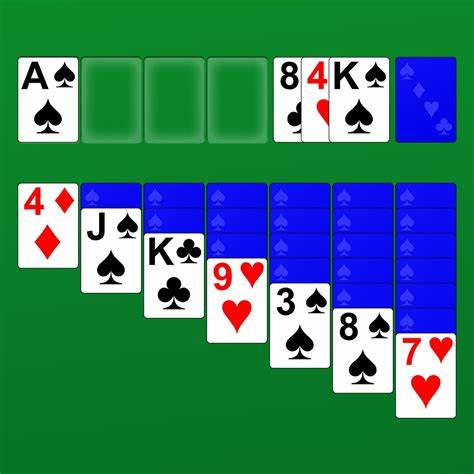 Solitaire Card Games come with easy to play Solitaire rules which can be played with a  single participant for an amusing time pass. The Solitaire are exciting games which require immense patience, but also give you overall entertainment. The solitaire card game is also available on your mobile phones which can be played while you are bored or travelling. This article will let you learn more about the solitaire game and its rules.

The player needs to release and play cards to fill the foundation pile in sequence and suit according to the rank of the cards. Solitaire Rules are a little bit similar to Gin Rummy game rule   For eg: K, Q, J, 10, 9, 8, 7, 6, 5, 4,3 ,2, A. The King (K) is in the highest position while Ace (A) is remarked as the lower one. The player needs to start the foundation pile from Ace (A), moving towards the highest rank (K).

The Tableau consists of the seven piles which are arranged as one card in the first pile, the second pile has 2 cards and so on with 7 cards in the seventh pile. The last card is face up for the player to start the game.

This pile consists of 4 piles which will contain all the cards which have been systematically arranged as per the rank. The piles are Hearts, Diamonds, Spades and clubs. The foundation pile starts with the Ace (A) pile and moves to K.

The foundation pile is seen at the top of the tableau.

This pile consists of the remaining cards after properly arranging cards in the tableau.

The name itself suggests those cards which are abandoned and don’t have any place in the Tableau and Foundation pile.

The player needs to start the game like a freecell game with the turned up cards and arrange them in descending order and in alternating colours. This process starts from the left to right and continues accordingly. The Solitaire Card Game starts by dragging up the exposed aces in order to arrange the cards from A TO K. The procedure continues till he frees all the cards from the Tableau.

The player can also draw cards from the stock pile, placed in the upper left side. Once he receives an Ace, the player puts it in the foundation pile, while arranging other cards. As soon as a set of cards is formed he places this set to one of the foundation piles. If the players may come across higher ranked cards like J, Q, K, it is to be remembered that these cards should be placed in the empty slots located above the tableau.

Patiently, the player gets successful in forming four sets of cards ranging from Ace to King. He quickly places all of them in the four empty foundation piles. The player has the freedom to take his own time to complete the game and celebrates his victory all by himself. Enjoy the game!

Hope this article helped you know about the Solitaire Rules! This game is quite indulging and has a childhood essence attached to it. The Solitaire Card Game is loved by everyone and is our sole friend during lonely times. You may also get various other solitaire games like Spider, FreeCell and Hearts Card Game. Download your favourite game and turn your lonely moments into solitaire moments!

For Spanish readers find the rules for Solitaire (solitario) in Spanish here.